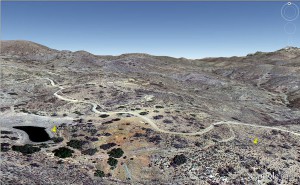 UPDATE:  Goodmark Capital Group, Inc. (2017): Click on link below to see Assay and gravity concentration test of our now claimed Oro Gold Mine extended areas.  (click on link and friend us on facebkook to see our latest project development photos)–> GoodMark Capital Group,  Inc. has now claimed up 108 Claims total including our origional Oro Gold Mine and newly acquired extended area plus our Sulfide Claims to the north (Previously Known As The Idaho Mine Group) and The Choctaw Mine. (NEW TOTAL CLAIMS ACERAGE IS AS FOLLOWS: 2,189.96+15.75+18.06=2,223.78 ACRES Total / 3.48 Square Miles). Our mining crew performed assay testing that showed averages of 1.43 Ounces Of Gold Per Ton and 8.93 Ounces of Silver Per Ton in these new areas.

MINE SITE 1: GoodMark Capital Group, Inc. has 108 claims Total in our Oro Gold Mine, Sulfide Gold Mine And Choctaw Gold Mine in southern Arizona. We hold the mineral rights to 2,223.78 ACRES Total / 3.48 Square Miles. GoodMark Capital Group, Inc.'s original 19 contiguous claims in the center of our mine ( 392.54 Acres )  were acquired from the original claim holders on 11-27-13 after Hellix Ventures, Inc. (HEL:TSX.V / HLLXF:OTC) that held the mineral rights to The Oro Gold Mine defaulted on their payment arrangement. ( “Hellix Drops Margarita Lease” ). We hold the rights to 100% of the Net Smelter Revenue Earnings from all extraction of GOLD, SILVER and any other commercially producible precious metals from the center 392.54 acres of our mine.  GoodMark added 89 additional  claims surrounding the original claim block of the Oro Gold Mine that was previously known as the Margarita Mine during the early 1900's after being claim recorded before that as the McDonald Prospect. (Additional 1,831.24 Acres)  We hold 100 % of the mineral rights to this 1,831.24 Acres we added to the mine that brought our total  claim block to 3.48 Square Miles ( 2,223.78 Acres ).  CLICK ON LINK: ►( GoodMark BLM Current List of Arizona ORO Mining Claims ) These mining claims are held on BLM land that has been Government Tested By The United States Bureau Of Mines (USBM BM 2010 Sample Sites) and drill core verified through many extensive core sampling programs totaling 17 in the last 40 Years.  The last drill core program completed a total of twelve vertical HQ size diamond drill holes to a maximum depth of 100 feet to confirm the  past historic testing programs that have been performed on the property.  The samples were collected, selected, handled and delivered to Skyline Laboratories in Tucson, Arizona by an independent Registered Geologist in charge of the QA/QC program on this project.  Sample procedures were followed that meet the requirements for NI 43-101 reporting.  Standards and blanks were inserted at prescribed intervals in each hole as well as a second re-sample of one reject material interval from each hole.  Standards were provided from a reputable independent geochemical contractor.  We know we have gold in the ground from the audit assay drilling information we possess on this property in addition to the vast amount of additional information on the 350+ core samples that have been performed in total on the property (700+ pages total).

Projection shown below indicates the value of the mine that is expected from recalculation on the original claim area of only the partial section of our whole claim that has had up to 400 ft deep drill core verification performed on it (See yellow claim block area only indicated in the news and updates section of our website) per Dekalb Mining Inc.'s minable reserves calculation in 1982 when factoring the (0.37)  Ounces Per ton of Gold / OPT AU shown in later drill core verification program's audit assay).  see footnote ¹ 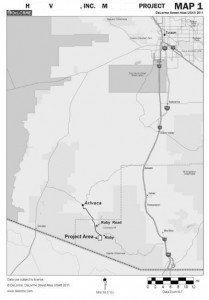 4. Dekalb Mining Inc. (1982): Surface sampling program and their study of the distribution of silicified zones showed their estimated possible and potential reserves tonnage to be 2.5 to 7.5 million tons equaling 150,000 to 450.000 oz. gold.

7. Golden Concord Mining Corporation (1983): 40 air track holes drilled and from the results (Drill hole data is available for most off the holes but final reports were unavailable) they recommended an additional 155 air-track holes, 2000 feet of diamond drilling and metallurgical testing.

10. Pirates Gold Corporation (1985): During 1985, a program of exploration was conducted for Pirates Gold Corporation by J.H. Montgomery, PH.D., P. Eng. Montgomery Consultants Ltd. For the purpose of a geostatistical reserve estimation a total of 233 drill holes were selected by G.H. Giroux, Ma. Sc., P. Eng. of Montgomery Consultants Ltd. showing 482,000 tons equaling 22,700 oz. gold reserve estimate. It is likely that the estimates would fall in the category of  indicated mineral resources as set out in NI 43-101.

12. La Teko Mines Ltd. – Now owned by Kinross 1991-96): Jeff Rogers of La Teko completed a total of 14 holes totaling 4000 feet of reverse circulating drilling to a maximum depth of 400 feet with a recommendation of additional mapping, sampling and data compilation based on a estimated potential of 2.3 million tons.